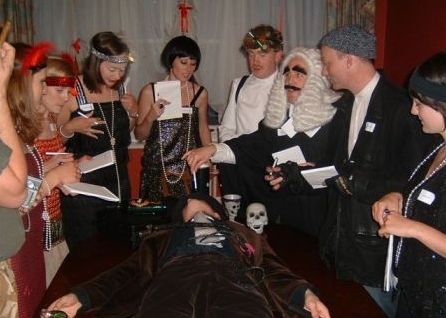 Become a part of the mystery with 'Murder Mystery Nights'! Their specially tailored events make YOU a part of the action with individual character sheets provided to make everyone a suspect & you could be the killer...

The events are run by professional actors, with over 20 years of experience providing entertainment of the murderous kind.

Their host for the night, takes on the role of ‘detective', linking evidence to the suspects, and posing questions for all to ask and make their deductions.

They always give a prize of a Bottle of Champagne to the winners, the 'Super sleuths' of the event; as well as giving Certificates to the main participants.

The guests take part in the story, they’re part of the plot, suspects or even the murderer or the victim. This goes down a treat! They could even get to ‘kill off their boss’ !

The crime scene is set for the group to visit and examine. They see the body where it is found... how it is found... with nothing touched or moved.  They can pick up and examine the evidence, passing it round to the rest of their group. This gives a realistic element to the investigation.  The events are intended to be fun and entertaining with comedy, jokes, tongue in cheek humour.

Here is a few ideas for storylines to be considered...

A Fishy Tale:
The group are all members of a secret society which is meeting to vote for it's annual awards. At the previous year’s dinner, a suspicious accident meant the main award went to a surprise outsider. It is hoped that this year's event runs smoothly, despite the rumours and suspicions, but inevitably, it does not!
Suitable for any type of event: parties, team building, conferences
and in any time period: present day, 60s, 70s, 80s, war time and twenties are the most popular.

A Deadly Game:
A murder mystery set in a mock TV studio scenario. The guests are all contestants for a place on the popular detective serial to be the new assistant to the programme's  famous star. As fame and high earnings beckon, the competition is intense to win the part. However, disaster strikes when a crucial person is found dead, and the trial investigation turns into a real one.
Suitable for any type of event: parties, team building, conferences. Set in the present day.

A Case of Bondage:
Everyone is a secret agent waiting to hear who is the traitor amongst the group. However, the officer about to reveal names is murdered before the information is released!  Is the real motive espionage?  Or can it be something else... like love, jealousy or money and greed?
Great for spies and James Bond fans. Suitable for parties and team building
and set in the present day.

Witch Way to Revenge:
Have the ghosts of 1664 returned to haunt you? The links to the execution of real witches are baffling you, until you realise that you are one of their descendants. Could there really be spirits causing all your bad luck or is someone using it as a cover for disposing of their enemies?
Suitable for parties, team building, weekends and Halloween
Can be set in any time period.